REMY & Ron Boots live at the Grote of St. Bavokerk 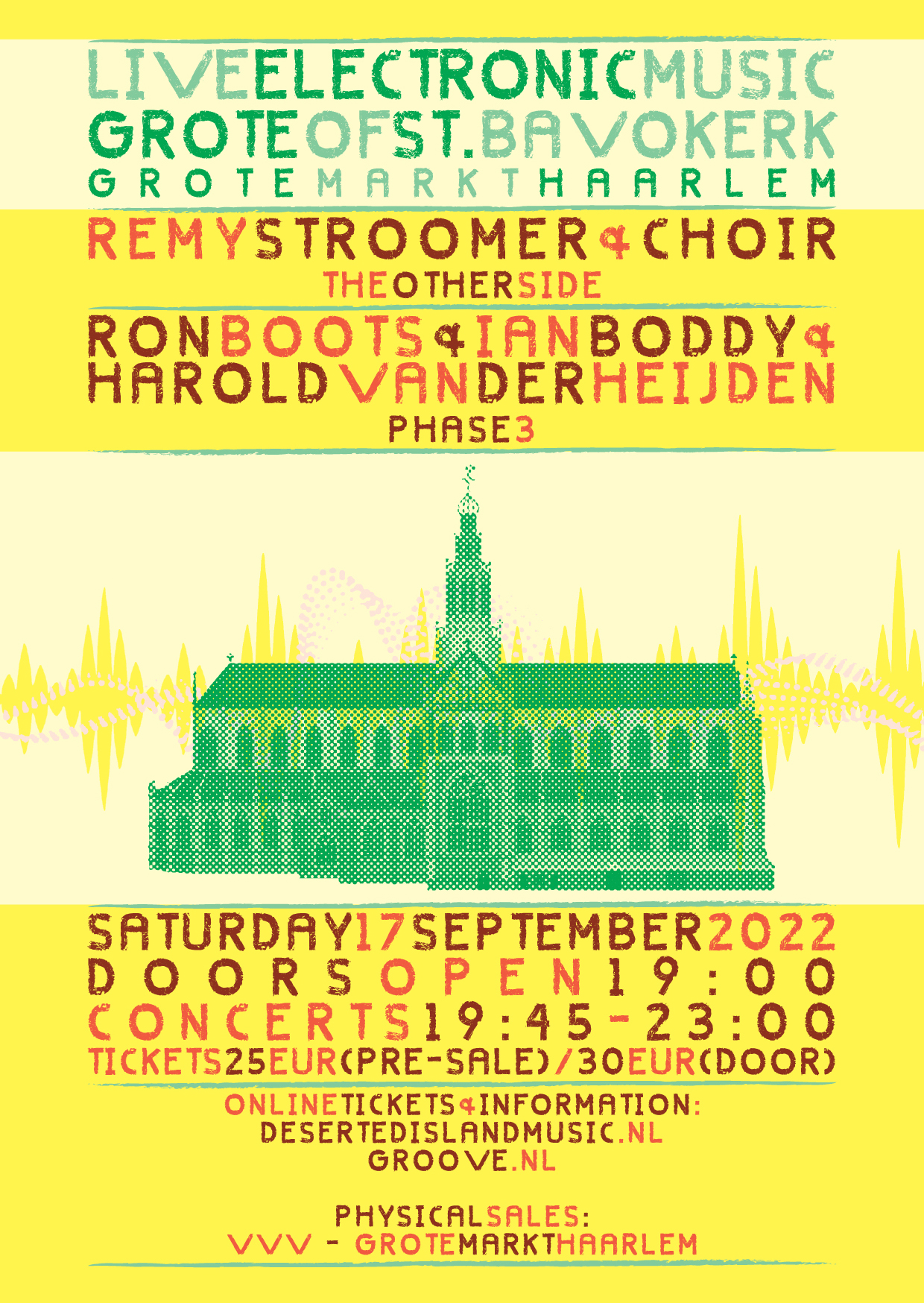 10 years ago, Ron Boots and Remy Stroomer organized a memorable evening at the unique location of the Grote of St. Bavokerk, situated in the centre of Haarlem.
Now, one decade later, both gentlemen decided to do it again. The same place, but different line-up.

MUSICIANS
Ron Boots (born 1962 in Eindhoven) has been producing electronic music since the early eighties and is part of the so-called third generation of musicians within the electronic scene. He is owner of Groove Unlimited, the largest electronic music label and mail order in the Netherlands. Ron invited colleagues Ian Boddy (synthesizers) and Harold van der Heijden (drums) to make an one-time return with their 1997 “Phase 3” collaboration.
Remy Stroomer (born 1979 in Haarlem) has been creating electronic music since the mid-nineties. He debuts in 1999 with the double CD “Exhibition of Dreams”. His earlier music is compared to that of Klaus Schulze from the late eighties and early nineties. Remy runs his own Deserted Island Music label since 2011. For the performance at the Grote Kerk, he will be accompanied by a choir composed of members of the Haarlem Student Choir.

CONCERTS
The three-part program combines electronic music with classical elements at an unique location: the Grote of St. Bavokerk in the center of Haarlem.
Organizers Ron Boots and Remy Stroomer play (just like ten years ago, when both gentlemen performed at this location for the first time) right in front of the world famous C. Müller church organ.
Remy plays an hour of music composed especially for this evening, based on his most recent album “The Other Side”. Besides playing synthesizers and grand piano, he will be accompanied by members of the Haarlem Student Choir.
Ron’s part consists of an improvised set of approximately one hour. He joins forces with synthesist Ian Boddy and drummer Harold van der Heijden. They collaborated as “Phase 3” for the first and last time in 1997.
The third part of the concert evening will be a joint session with all musicians. What exactly is going happen will become clear on the evening itself.

UPDATE SEPTEMBER 3TH: Ian Boddy will not be able to join Ron Boots & Harold van der Heijden on stage. Due to health issues doctors have advised him not to travel. As health is our most precious possession it’s best to do what the doctors say! And don’t worry, Ian is fine. The music goes on. We are glad to announce that Stephan Whitlan and Frank Dorittke will join Ron & Harold onstage for this amazing event. These two great friends and musicians will make this event very special.

TICKETS
You can choose from two different tickets: the “Regular” one gains access to the concert, and the “Virtual” option is for the live stream.
The “Regular” ticket consists of a QR-code, which can be showed via your mobile phone as well as print. The “Regular” option also includes a download link.
The links will be sent seperately via mail one or two days before the concert takes place.